It’s hard to read James 1:27 and see it meaning anything less than exercising compassion toward those in need: “Pure religion and undefiled before God and the Father is this, To visit the fatherless and widows in their affliction, and to keep himself unspotted from the world.”

Christians throughout history have left us a rich heritage of modeling this kind of “pure religion” as they have sacrificially given of themselves to care for the exploited, rejected, and abandoned.

Historical examples—such as George Muller, Amy Carmichael, and William Wilberforce—are the easiest to give, because they are the most widely known today. But I personally know Christians around the world—from Sunday school teachers here in our church to missionaries such as Rick and Becky Martin in the Philippines—who serve the poor and marginalized in sacrificial ways. I know missionaries who have established children’s homes for orphans and schools for the illiterate. I know Christians here in the States who have opened their homes to foster children, advocated for unborn children, or worked to combat human trafficking.

Where the gospel has gone forth, acts of mercy and compassion—including hospitals and schools around the world—have always been a result. Christians and local churches by the thousands give benevolence daily in America. Many Christians are involved in hands-on efforts to minister to people as well as to enact legislative policies to help with some of the great tragedies of our day, such as human trafficking, abortion, homelessness, and a broken, overwhelmed foster care system.

But there is a significant difference between Christian compassion and the social justice movement of today. Caring for people and involving oneself in policy changes to counter the sin and brokenness in our world is needed. Supporting organizations and causes that include anti-biblical ideology is wrong.

I see the first (caring for issues and loving your neighbors) as involvement in social issues. I see the second (aligning with questionable groups and causes) as the social justice movement. Someone else might define the terms differently—and I won’t quibble over semantics—but for sake of clarity in this article, that is how I’m using these terms.

One of my concerns with the larger social justice movement of our day is that it finds a ready home in theological liberalism. For instance, consider this tweet from Raphael Warnock, a progressive pastor and United States senator, that he posted (and later deleted) on Easter Sunday 2021:

“The meaning of Easter is more transcendent than the resurrection of Jesus Christ. Whether you are Christian or not, through a commitment to helping others we are able to save ourselves.”—Raphael Warnock, April 4, 2021 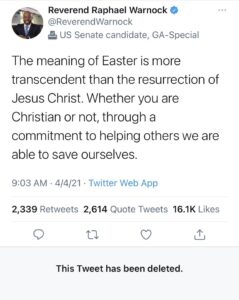 To biblical Christians, this statement is outright heresy. There is nothing more transcendent than the bodily resurrection of Jesus Christ from the dead. And there is no ability to save yourself through a commitment to helping others or any other way. Salvation can only be found in Christ. “Neither is there salvation in any other: for there is none other name under heaven given among men, whereby we must be saved” (Acts 4:12). Furthermore, to make the atoning death and resurrection of Christ anything less than a substitutionary sacrifice for our sin is not only incorrect, but it is blasphemous.

Have you ever noticed that the strongest voices in the social justice movement are either non-Christians (and often outspokenly so) or theologically-liberal Christians? Some point to that reality and say, “See, Christians aren’t involved enough.” I disagree. As mentioned earlier, I know many Christians who are deeply involved in social issues and needs. Christian compassion is always an appropriate and needed response to a world that is suffering.

But I believe there are reasons that biblical Christians are not the strongest voices for the social justice movement: First, they mostly aren’t welcome in the mainstream social justice movement because much of the movement has philosophical roots that run directly counter to Christianity, including pro-LGBTQ and pro-Marxist ideologies. (See my little book Which Justice? for more on the connection to Marxism.) Second, they aren’t as likely to broadly align with the movement because their theological belief system sees different answers to social needs—namely, the gospel.

In some circles, progressive Christians insist that engaging in acts of social justice is a requirement for preaching the gospel. Some even go so far as to say that if a church does not do works of social justice it is not preaching the full gospel. (Both of these positions were also espoused by proponents of the social gospel movement.) Eventually, these ideas give way to a belief that involvement in the social justice movement is part of how one earns salvation. (In personal conversation with a pastor of a church in Los Angeles a few months ago, he specifically told me his hope for salvation was based in his involvement in social justice.)

Remember that theological liberalism is rooted in unbelief, namely unbelief in Christ as the only way of salvation and the Bible as the infallible, preserved truth it claims to be. But these theological systems of unbelief often find footing in lives and churches that desire cultural acceptance more than they desire the approval of God. Unfortunately, a desire to be liked by the world leads to a willingness to be like the world.

Where this desire for acceptance by the world connects with the social justice movement is in its unwillingness to define sin as “the transgression of the law” as God does (1 John 3:4). In the modern social justice movement, “sin” has nothing to do with God or His law but everything to do with whatever contributes to a negative outcome someone may experience. The obvious cultural problem is that this thinking leads to a lack of responsibility, but the larger theological problem is that it leads to a lack of accountability before God. How can someone see his need for a Savior if he doesn’t even believe he is a sinner?

This unwillingness to call what violates God’s law “sin” extends even further as the social justice movement as a whole rejects the Bible’s clearly stated commands concerning marriage, gender identity, and human sexuality. Biblical convictions in these areas are not popular or welcome among the mainstream social justice movement, thus they are often downplayed or denied by Christians seeking to model involvement in social justice.

As biblical Christians, we must be careful that we speak from God’s Word to the issues of our culture rather than attempting to adjust Scripture to culture.

In his book The Gathering Storm: Secularism, Culture and the Church, author Albert Mohler gives an example of the radical nature of the social justice movement and how it can fundamentally change the very doctrinal moorings of the church. In fact, he describes how this exact thing happened to an entire denomination, the United Church of Canada, through a theological downgrade beginning in the 1960s. He concluded, “Social justice concerns propelled the denomination rather than theological commitments. As such, this church became a servant to secularism and liberalism in Canada. It pioneered transgender ministers, supported abortion, and championed same-sex marriage, even before it became legal in Canada.” (Nelson Books, 2020, page 24)

When culture becomes our gauge for what is offensive or helpful to the gospel, we will give an uncertain sound concerning truth, righteousness, and the Bible itself. The church will never please the world when it is living according to the New Testament. Our goal must not be to appease an angry culture; it must be to please God and declare the gospel.

One of my great concerns with the social justice movement is that, while cloaked in a veneer of compassion, underneath lie worldly philosophies and anti-Christian agendas. The warning of Colossians 2:8 applies, “Beware lest any man spoil you through philosophy and vain deceit, after the tradition of men, after the rudiments of the world, and not after Christ.”

Are the physical needs of people relevant to Christians? Yes! If we believe James 1:27, we are to practice sacrificial compassion as an expression of the love of Christ.

But we who know Christ personally also know that the soul of man matters most. “For what shall it profit a man, if he shall gain the whole world, and lose his own soul?” (Mark 8:36). With this in mind, if we engage in a movement that, while espousing a form of worldly compassion, denies personal sin and the vicariously atoning work of Jesus Christ, we are not helping as we may think.

Justice matters, so give sacrificial compassion.

Jesus matters most, so stand firmly committed to Him and to His unchanging truth.

If this article was a help to you, consider sharing it with your friends.